Fill the Sports Void in Your Summer The World Cup is over. The King has made his decision to leave the Heat and return back home to Cleveland. And there’s 3 weeks until the start of NFL pre-season football. If you’re in a town where your MLB team is 10 games below .500 I imagine the 8 dollar beers aren’t as refreshing as they were in the beginning of the season. So what now?

We all knew the World Cup final was on Sunday between Germany and Argentina, but perhaps a nap, yard work, or some outdoor fun took precedence. After the USA was eliminated, if you didn’t feel “united” enough to head to a sports bar or go to one of these big-screen viewing parties we’ve all been seeing, don’t feel alone. After viewership of 24.7 million and 21.5 million in the final USA matches, the highest viewed post-USA World Cup game was Brazil vs. Columbia, which reached only 11.84 million viewers.  Now it’ll be another 4 years till we watch soccer again.

The discussion and anticipation around Lebron’s decision was exciting and it seemed everyone had an opinion…or at least a hope (…wish or dream). But back to Cleveland he goes. It appears he made his decision to go back just in time to mentor the young Johnny Football. Lebron “King” James and Johnny “Money” Manziel might be the biggest economic stimulus package Cleveland has ever seen. I’m sure the first NFL pre-season game, Pro Football Hall of Fame Game on August 3rd in Canton, Ohio will see a large amount of traffic flow down from Cleveland. But that seems like a lifetime away. 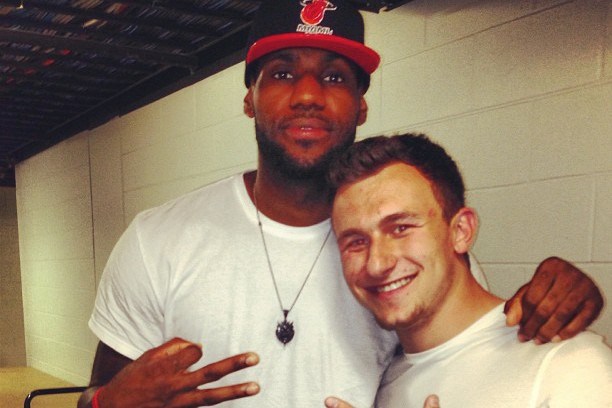 One upside for sports lovers is the 85th MLB All-Star Game tomorrow evening on Fox! Tonight’s homerun derby will likely draw more viewers than the game itself, but the excitement has been diluted by the World Cup; the beach, lakes, and Summer concerts; and some big cities with losing records. Perhaps it’s the declining attendance of the MLB ballparks, the lack of cable viewers, or a reduced marketing budget of the MLB, but a baseball game in the Summer doesn’t have the same feel as it used to. So if your team is below .500, what are you going to do to fill the 3 week sports void in your life? Pick the final order of finish for the AL & NL in Round 1, ranking players 1-5 by using the dropdown menus. A perfect bracket could win you $25,000.

Sports are more than simple competition to us (though that is a must), it’s more about the athleticism, community, and camaraderie. A few requirements for you as you seek your sports fix over the next 3 weeks:

Living in San Diego, I have all year to do outdoor sports and be active, but with work, school, and following other sports I don’t take the time to enjoy them as actively as I would like to. Over the next three weeks I’m going to capitalize on my down-time by involving as many people around me as I can in learning and developing skills in the following:

About the Author
Steven is a student of the world and ambitiously involved in his work as an IT project manager, an MBA student in San Diego, entrepreneur, dog owner, and the list goes on . Steven is an Air Force veteran aviator hailing from a small town in Ohio and now keeps active in sunny San Diego. Whether it's rock climbing, golf, football, surfing, tennis...etc. he's excited to innovate, to learn, learn and excited share his experiences.
Social Share